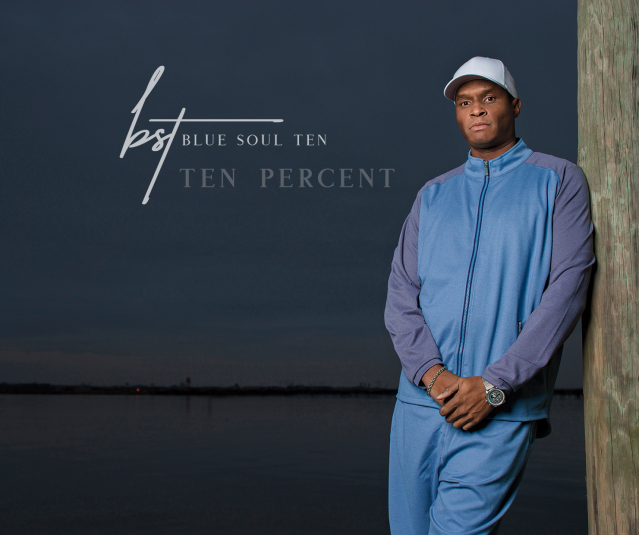 Blue Soul Ten is the artistic moniker and musical brainchild of musician, composer and producer Clay Greene. He’s been part of the music industry for 20 years, starting out as a radio DJ as well as studying composition and production at the prestigious Berklee College of Music. His music incorporates jazz, funk, soul, electronica, reggae and hip hop with his tracks often featuring guest artists. He’s released four albums previously, The Unspoken Warrior, The Fearless Warrior, The Beautiful Warrior and 2018’s Blue Notes.

This album, Ten Percent, consists of eleven tracks and starts out with the title track. It’s a jazz/soul instrumental that acts as a good introduction to the exquisitely performed and produced Blue Soul Ten signature sound. Opening with warm sax over subtle piano chords, an intricate percussive pattern breaks into a toe-tapping beat with a pulsing guitar lick driving the musical momentum forward. As it progresses with layers of synths and hints of female vocals, it sets the mellow yet sophisticated vibe for the whole album.

The second track Give In To Me flows seamlessly from the first. It’s a soul/RnB track with a slinky groove and some fine funk-style guitar work. The smooth male vocals fit the track perfectly, a succinct verse leading to an understated but subtly infectious chorus. The simple but effective bassline adds to the sensual vibe, along with the sax break towards the end. A good choice as a single release.

Make It Hot maintains a similar tempo but this one is a hip hop track featuring a performance from rap artist Surron The Seventh. Based around smoky Rhodes and a catchy vibraphone melody, Surron lays down his rhymes over a punchy hip hop beat. He has a natural flow on the mic with some great lines: “Listen, we learned the hard way…always running fast money like a Maserati car chase…”. This is interspersed by a female sung refrain which acts as the perfect contrast. Great track.

Life is another fine song, a laid back jazzy soul track with a summery vibe and featuring some exquisite vocal harmonies on the title hook. The guitar work once again is stellar and the catchiness of the chorus along with its radio friendly sound makes this another potential choice as a single.

Next up is my personal favourite on the album, the reggae/dancehall track Satisfied, featuring the vocals of Zahira. Set to a chugging reggae groove and syncopated, funky guitar Satisfied is a superbly crafted song building to an instantly memorable chorus. The vocal performance is first rate and the bursts of brass add to the colour before a searing electric guitar solo takes the music into the stratosphere. It’s a potent blend of genres fused seamlessly and sounds like one hell of a party.

Another fine instrumental, 10% Interlude, breaks things up nicely between the sung tracks and leads perfectly into Real Love which is based on a Police-style tight guitar lick. It features the same male vocalist as Give In To Me and it’s another sensuous song about the allure of a woman: “Every time you look at me, lost in the synergy…you are a firework in my headspace.” The hook works with the guitar line to great effect and it’s another track suited to radio. Listen out for the backwards wah-drenched guitar at the end.

Purpose (featuring IV) returns to the soulful hip hop sound with another strong rapping performance. The chord progression underneath shows the jazz influence with a meaty bassline going to melodic places you wouldn’t expect, but it works. There’s a more spiritual vibe to the rhymes than you find in most hip hop (“I don’t do this for the profit, I do this cos I’m God-sent…”) and the whole track has a deep message about finding your purpose in life.

These Words starts out like a soul/RnB ballad on the verse before developing into a fine EDM track with a swinging beat on the chorus. Again, it’s a fusion of styles that sounds completely natural and the lush female harmonies complete the sonic picture. Listen out for some unexpected chord changes on the middle eight that shows the jazz roots of the music. The memorable vocal hook makes it another apposite choice as a single.

The jazz influence comes to the fore on the slow-paced Grateful with some gorgeous arpeggio piano and Rhodes forming the bedrock for an intimate and sensual vocal performance that brought to mind Corinne Bailey Rae. Halfway through we hear some lovely Spanish-style classical acoustic guitar which adds to the sophisticated flavour and classy feel.

The album closes out with a final instrumental, Blue Theme V, starting with a didgeridoo (yes, you read that right!) then developing into the Blue Soul Ten signature sound once again, full of rich saxophone and super tight guitars. There’s a wealth of instrumental detail in the mix, from swirling synths to soaring strings and brief bursts of biting brass. It’s a nice way to come down from an album of consistent highs and wraps things up perfectly.

Overall, this fifth album from Blue Soul Ten is of the highest quality from start to finish. The standard of musicianship and composition is first rate and the way eclectic genres, from jazz to hip hop. are brought together is highly impressive. With a plethora of potential singles and stellar performances from featured artists, Ten Percent covers every base in terms of commercial appeal and artistic endeavour. Clay Greene has surely made his masterpiece.