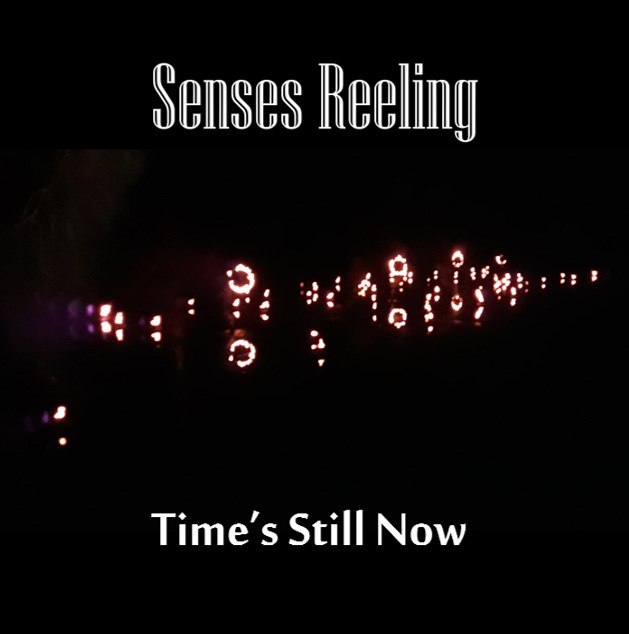 Senses Reeling are a studio-based musical project and collective based in the south of England centred around Nick Fuller and Paul Midcalf,  along with other musicians. They have released four EPs since 2012 including Ferocious Love, Burst Through The Blue and Missing Something. Their music is essentially indie/alternative pop and they cite influences such as The Blue Aeroplanes, Frank Turner, Squeeze and Elbow. However, they also encompass diverse genres such as elements of lo-fi, punk and experimental, spoken word and musique concrete.

Time’s Still Now Is their debut album and consists of twelve tracks. It feels very much an album of the times, with highly relevant social issues of this era featuring strongly in the lyrics. This is balanced by a detached philosophical approach that highlights the timeless aspects of the human condition, as all good art does.

It starts out strongly with the upbeat indie pop of Signs of The Storm. Built around a sparse, bouncy beat and a picked, melodic guitar line, the opening lines immediately convey a depth and emotional maturity: “I’ve always kept my eyes open, not hidden from the dark….”.

The arrangement builds gradually with the entry of a muscular bassline then breaks down for the chorus augmented by synth strings. The lyrics here depict the futility of trying to prepare for hard times: “So when the signs of the storm became to real to resist, and the heavens loudly opened to only my clenched fist, all that preparation was more than fooling myself...”.

The chorus, and the end of the song, concludes, “maybe distraction is a better way?” and it’s a fine observation to make. Leaving the question open makes it more artistically interesting, letting the listener reflect rather than be told what to think.

Second track Press For Freedom is a very apposite song in the current climate, about cases of phone hacking and leaking by the British media, although it’s a relevant problem worldwide. Musically, it’s much more alternative and starts out with a percussive pattern that draws you in. The whole track is rhythmically angular with very effective use of syncopation and frequent accent shifts.

Every section of the song has a different time signature but they all flow seamlessly, with snaking guitar lines driving the music forward. The conviction behind the song is captured in lines like, “money talks in court when victims have none…” and the barbed refrain “Don’t let them off the hook”.

Someone Else is closer to the style of the first track and has already been released as a single. You can read my full review about that song here, but suffice it to say it is another very thoughtful alternative pop song, this one making us think about how much we need to appreciate the older generations, particularly our own elderly relatives.

The brief but beautiful Close is one of the most minimal songs here, consisting of just solemn piano and an affecting lead vocal, with subtle backing vocals towards the end. It brought to mind the moving melancholy of Mad World by Tears For Fears. Lyrically, it’s an honest confession of how much someone means to them: “You might not think you’re close….but believe me your the very air that I breathe….”. A tender and poignant ballad that shows a very sensitive side to Senses Reeling.

The Rest Of My Life is another contrast, a gritty indie song that made me think of mid-period Blur with its insistent guitar rhythms. The vocal performance is reminiscent of U2’s Bono and in parts Suede’s Brett Anderson (a compliment!). This is the group showing their harder side and once again shows their gift for memorable melodies. The lead guitar by Mike Youé of The Blue Aeroplanes gives the track real bite and is all the more effective for being used sparsely elsewhere.

Foreign or Poor is just as gritty, with a coruscating lyrical message to convey about a tragic fire that occurred in England. For those not familiar, a tower block in London, Grenfell Tower, burnt down killing 72 people. The anger people felt was because  safety concerns had been ignored and the songs reflects this, observing that the people who died in the tragedy were unjustly neglected.

Staring with dissonant chords on piano, the lyrics depict a bleak reality: “Feels like it’s the law, you don’t count if you’re foreign or poor…”. Another affecting and thought provoking track that ends in a blaze of raging guitars, perhaps depicting the out of control fire.

A Trick is a return to their more light hearted alt. pop style which stands out for a very fine lead vocal by much lauded UK singer/songwriter Tom Williams and a strong melody augmented by Smiths-esque jangling guitars. It’s more personal content acts as an effective contrast as the following Labels is another very intense track. This one looks at the divisive political situation that has been created in Britain by the referendum to leave the European Union.

Musically, Labels is perhaps the most difficult track to categorise but it’s essentially electro pop with jagged reggae-style guitars and punctuated with stabs of brass. The brooding sonic landscape brought to mind XTC’s Making Plans For Nigel and The Specials’ classic Ghost Town, another song written in an era of political turmoil.

This synth-heavy sound continues into ninth track Easy. This one has an interesting and unusual beat, a recurring feature in their music. It deals with how much technology rules our lives and the cost that comes with it. Halfway through it enters a very catchy refrain section that drives the point home: “Just because you can doesn’t mean that you should, easy isn’t better, easy isn’t good….”.

Together is the most avant garde track on the album by far; an eight minute instrumental (mostly) based around a haunting piano melody overlaid with a female spoken word monologue. The words are actually excerpts from someone’s diary being read after they have passed on. The music gradually builds underneath the monologue and it’s surprising how the quotidian details of someone’s life can be so moving when set to music. A very creative and affecting piece of work the band can be proud of.

The poignancy stays at eleven for the next song, the heartfelt mid-paced track Please Don’t Stand Out In The Rain. It’s a caring song, offering advice to someone who’s suffering with grief and encouraging them to let the grieving process take its course but not let it take over their life. For some reason, not many artists are brave enough to write about the difficult situations of life but Senses Reeling are artistically the richer for it.

The final track, Belong, deals with one of the most important aspects of the human condition, the desire to belong somewhere. It’s a string-drenched epic ballad replete with their customary rhythmic invention and unexpected changes in musical texture.

Halfway through it breaks down to a tranquil middle section with reflective lyrics: “The quietness to hear myself think, that sometimes I run from… this place was their beginning and their end”. As it builds back up for the songs climax It brings to mind the stirring indie anthems of Elbow, especially with the uplifting refrain, “There’s a heart where we belong….”.

Overall, this is a highly accomplished debut album full of musical range and emotional depth. Senses Reeling forego the frivolous themes that dominate the mainstream and aim straight for the jugular, with hard hitting but hugely melodic commentaries on both social and political issues as well as the deeply personal. This album will appeal to indie and alternative music lovers across the spectrum and deserves all the plaudits it will doubtless receive.