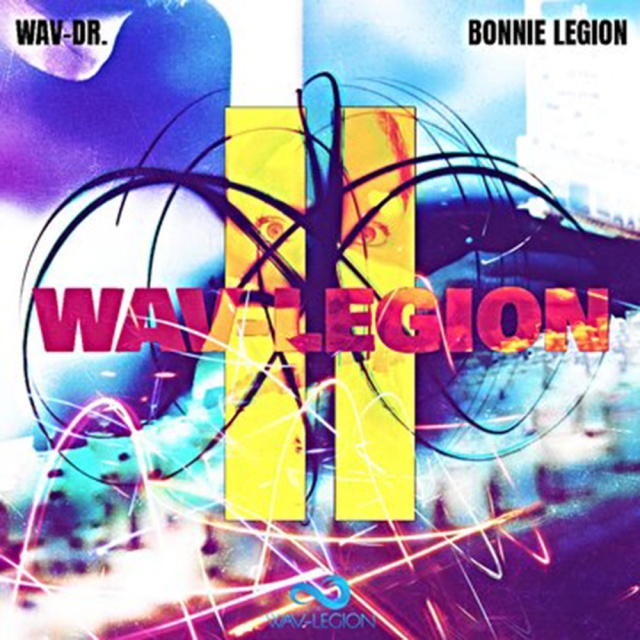 This artistic project has a fascinating and very modern genesis. Bonnie Legion has been a multi-genre recording artist for over a decade and in late 2018 she connected with the Canadian producer, songwriter and musician wav-Dr.

Their first collaborative track was Heavy Weight and this led to a full length album, Wav-Legion, which fused electronica with real instrumentation and was released at the start of 2019. This highly eclectic duo encompass several genres including pop, rock, hip hop, electronica and soul.

Hot on the heels of their debut album comes this epic sixteen track album just a few months later. It gets off to a fine start with the super catchy and acerbic Escape The Mundane (ft. Miss Efemby).

Blending a pumping four-to-the-floor dance beat with strummed acoustic guitar, the lyrics depict quotidian life and trying to transcend it: “Clock ticks slowly, a quarter to insane, I go around in circles on the road of the mundane.” The music’s momentum is so strong you hardly notice its lengthy duration, breaking down and building up around the halfway mark with some nifty lead guitar work.

Fear of Flying is equally good, a mid-paced mash up of electronica, dubstep, hip-hop and pop with another great hook and lead vocal performance from Bonnie Legion. The loose, funky beat is pure hip-hop, melded with smoky Rhodes electric piano along with both acoustic and electric guitar. This provides the bedrock for a fantastic vocal arrangement, layered with backing harmonies. A potential single.

Money Time Life is more minimal, a languid RnB beat and eerie synths setting the scene for a haunting lead vocal from Bonnie, interspersed with spoken male vocals (presumably wav-Dr.) intoning the unsettling title hook: “They want your money, your time, your life….”. Fourth track The Wave It Rides is a similar tempo but with a more intricate, tribal sounding beat. This is fused with disco bass, funk guitar and some quirky vocal effects. Very inventive and pleasingly impossible to categorise.

Flip Side maintains the mellow vibe, this one with an understated but deceptively catchy hook (“See you on the flip side…”) that blends the two members’ vocal styles perfectly. The lyrics are deliciously dark and subtly apocalyptic: “Let’s watch the world as it’s burning down, fingertips gonna touch the sky when its coming down….”.

Directions is rather more upbeat, a sassy and fiesty vocal performance from Bonnie that brought to mind the equally eclectic St. Vincent (Annie Clark). As usual, the lyrics are full of wit and pithy observations on life: “Everybody’s got the truth, I say it’s yet to be found….”. Fantastic track and another potential single.

Layered Intentions brings back the hip hop vibe with a slinky, shuffling beat, interspersed with funky Rhodes piano. It’s another standout performance from Bonnie Legion, who shows a rhythmic dexterity of delivery that would rival the finest rappers out there. The whole album is cutting edge but this track feels like it really has its finger on the pulse, stylistically.

The superbly grimy Money Crime seems to emerge from the slipstream of the previous track, taking it to another level with a more soulful pop vibe and a killer hook. Yet another good choice as a single.

Ninth track You Up is quirky rock-infused electronica with wav-Dr. taking over the majority of the vocal duties, which adds further contrast and variety to the sound. The message is defiant and empowering: “Don’t let them keep you down, don’t let them fuck you up, you’re only on the ground, I’m here to pick you up….”.

Hello City is another great track with an important message to impart about the homeless along with its genius title hook: “Some of them are sick and wounded, some are always high, but if you were out in that cold alone you would long to fly…”.

Soldier is another masterful fusion of pop, RnB, dubstep, EDM and rock that starts out sparse and unfolds into a very clever arrangement that builds up until the very end. Lyrically, it’s affecting; it depicts a troubled, complex relationship with someone who has issues but who’s also the source of encouragement and support (“Girl, you’re a soldier…onward, soldier“).

How Bad is one of the album’s most pop moments with a huge title hook that soon latches in the memory. Of course, there’s all sorts of smart genre fusion going on underneath the poppy hook, making it the most modern, cutting edge pop music out there.

Missing It is more proof of this, a relatable song about the realities, contradictions and complexities of human relationships. Musically, it throws together subtle country-style guitar with chugging funk/reggae guitar along speaker-rumbling synth bass and a restless, insistent beat. Once again their combined vocals hit the yin/yang bullseye, captured by the haunting title refrain.

Hynoptise is one of the album’s most earthy and sensual songs with a seductive rhythm and an alluring ‘come hither’ vocal from Bonnie.  The result in an intoxicating, exotic sounding piece of pop that is perhaps the most commercial and accessible track here, with lyrics that get right to the point: “Hypnotise my mind baby straight to heaven …..let the smoke rise“.

The album’s final two tracks maintain the remarkably consistent quality, with Kinetic being another pop gem featuring a fantastic second section based around the tribal mantra “Let it bring down fire and lightning“. It’s another fine example of how they breathe new life into what many perceive as a stale format.

Last track Stop Thinking (featuring Robert P. Kreitz II as feature producer) is both one of the most experimental and quirky yet infectious and addictive songs on the album. As if the Black Eyed Peas had dropped acid and gained an imagination, the track is driven by disorientating and wild synth sounds, constantly morphing underneath the dynamite vocal melody. A hugely entertaining note to end on.

Overall, this is an outstanding modern pop album that fuses a bewildering range of genres together seamlessly and reinvents what pop music actually is in the process. The sustained inventiveness and creativity across sixteen tracks, along with consistently strong lyrics and melodies, make Bonnie Legion and wav-Dr. a musical force to be reckoned with. Balancing originality and eclecticism with peerless pop nous, their commercial potential is enormous as is their creative potential for the future. Ones to watch, for sure.