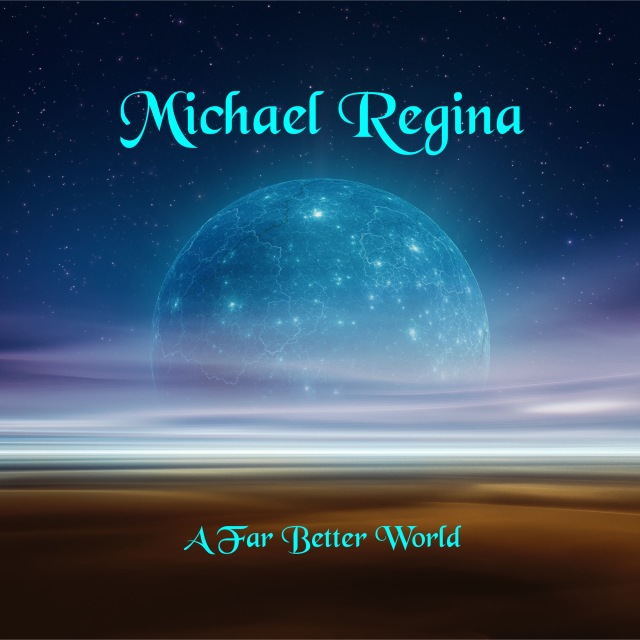 Michael Regina is a composer, producer and multi-instrumentalist born in the Bronx, New York City. He was inspired as a child by the classic performance of The Beatles on the Ed Sullivan Show and he’s been performing musically since his early teens. Starting out on violin and French horn, he got into guitar in his teens and in the 1980’s began writing and playing with bands. This led to becoming the main songwriter and lead vocalist of glam metal band WHITEFOXX.

They garnered attention in rock magazines around the world including the American publication Hit Parader and Britain’s best known rock magazine Kerrang. They were regularly played on radio and were offered several record deals. These were eventually all declined and they disbanded in 1989. Now based in New Jersey, Michael has turned his compositional talents to New Age music, which allows him to apply the skills and knowledge he learnt both in the classical music field and in rock music.

This album, A Far Better World, is his fourth, following on from the albums Ascension, Winter Chill and New Day which were released in 2017, except for the latter which was released this year. It consists of eleven tracks and was produced by himself in his own home studio.

Opening track Genesis 1 is an evocative way to start the album. The title obviously brings to mind the Biblical book describing the beginning of the world and this track perhaps depicts the start of a far better one. There’s a subtle grandeur to the music that reminded me of Vangelis, another New Age composer who had a background in rock music (he was a member of Aphrodite’s Child). There’s a strong influence of classical on this one.

The following Tomorrow’s Realm is more a combination of his rock and classical influences. Whereas much New Age music can often be instrumental with no use of percussion, here Regina employs a simple 4/4 rock beat as the bedrock of the music. On top, a haunting synth melody is overlaid, supported by a brooding chord progression. The structure also shows his songwriting influence, with repetition of the various sections similar to what you’d find in a rock song.

Continue M is one of the more cutting edge sounding tracks, and will appeal to a broad range of electronica fans. The core of the track is a restless, syncopated bassline that drives the music forward while otherworldly synths are interweaved into the sonic tapestry. It certainly achieves its aim of transporting the listener and one of my personal favourites on the album.

Peace and Time is another fine piece of composition with a languid, dreamy feel. It is based around a simple, spacious beat which forms the platform for another Vangelis-style epic melody, which Regina clearly has a gift for. The following Lullaby In The Stars is a gem; the melody is immediately memorable and its built up gradually with synths either doubling the melody or harmonizing it. It gives a real sense of transcendence, as if floating through space.

Next comes the title track and it’s a stately, expansive piece with another haunting, enigmatic melody that is varied across the course of the track with various synth sounds. I enjoyed how the music broke down almost to a whisper before blossoming back into full Technicolor. Seventh track Lunar Lounge is very aptly named, being one of the more harmonically adventurous pieces on the album. The modulations help to take the music out into the ether and it’s a very pleasant place to be. Another understated but finely crafted melody, underpinned by subtle but effective pulsating synths.

Cool Space is a nice contrast. Starting with just a simple chordal progression, it builds into a brilliant piece of electronica, with use of rhythmic synths reminiscent of Giorgio Moroder. It’s relatively brief at two and a half minutes but is certainly one of the album’s highlights. Light Years Away is an epic, twice as long as its predecessor and lives up to its title. It’s the musical equivalent of an astral travel and is another showcase for Regina’s talent to create a mystical soundscape.

This ‘space exploration’ vibe continues into the final two tracks, With Honor, and the album’s real epic, Dream Within A Dream, which clocks in at six and a half minutes. The former is striking for its use of exotic percussion towards the end, giving it a magical feel. This segues into the final track nicely, which is a suitable end to what has been a vast musical odyssey. It’s one of the best melodies, which is beautifully harmonized. The last three minutes are truly ethereal, giving a feeling of space and time being displaced.

Overall, this is a highly accomplished and thoroughly enjoyable voyage through sound by a composer who combines his classical and rock knowledge to great effect. Every track has its own qualities, yet it works as an organic and cohesive whole. Any fan of New Age/ambient music, or just electronica fans in general, will find much to admire here and I hope Michael Regina gets the wide audience his music deserves. https://open.spotify.com/album/6Ktzk8jcfgQi47JvkrJYt9?si=21s_sgaKRzyU9TEVvDeOqQ 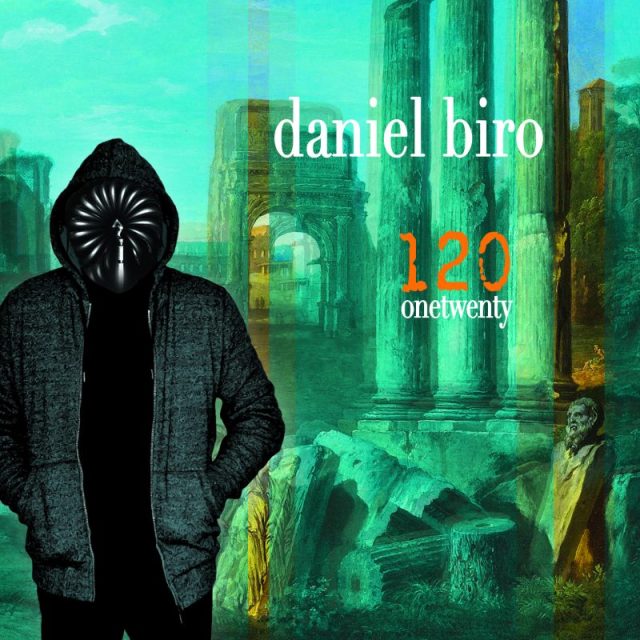 Daniel Biro is a musician, composer and producer based in London. He was originally trained in jazz but his creative output has expanded into an eclectic array of genres including ambient, prog rock, psychedelia and fusion, to name just a few. These diverse sonic explorations have been fuelled by his love of analog synthesizers and other electronic sounds.

He has numerous film and TV credits to his name including work for the BBC, numerous award winning short films and the score for the film Things of the Aimless Wanderer, which was featured in several film festivals. Aside from his solo work, he plays live in two bands, an electric psychedelic jazz band called Mysteries Of The Revolution and an ambient improv band Echo Engine.

His influences are wide ranging as you expect; jazz greats like Miles Davis, Herbie Hancock and Chick Corea, progressive rock like King Crimson and Tangerine Dream, ambient and instrumental artists like Brian Eno, Vangelis and Mike Oldfield. The influence of minimalist composers like Steve Reich and Philip Glass should not be underestimated.

An understanding of these various artists is important in fully appreciating Daniel Biro’s nuanced music. This album, 120 Onetwenty, is an hour long musical odyssey that has taken six years to complete. It consists of ten tracks of varying duration, mostly under the category of ‘epic’ and has been produced entirely with Biro’s collection of vintage analog keyboards. This shows in the overall sound which is rich and full, as opposed to the digital sonic thinness of much mainstream electronic music.

Opening track Door is one of the shortest and serves as an introduction to Biro’s sonic universe. It sets a mood instantly, a soundscape that disorientates the listener by somehow standing outside space and time. Once this dislocation has been accepted, the music feels meditative and psychedelic in the most profound sense. Pitch shifting synths that sound like futuristic war sirens create a mesmerizing mood, mingling with delicate splashes of Rhodes piano, one of Biro’s favourite sounds.

Second track Ancient is the one of the ‘epics’. It’s a masterpiece in slow musical development, building in complexity naturally and gradually like Mike Oldfield’s finest work, though more minimalistic in style. The way the music grows and expands organically, almost symphonically, shows the influence of classical composers like Reich and Philip Glass. It also brought to mind the other worldliness of The Orb’s ambient classic double album Adventures Beyond The Ultraworld.

The main melody doesn’t begin for 6 minutes and then really starts cooking, continuing seamlessly into Nimbus. It begins with an arpeggio-based chord sequence on Rhodes before being joined by an airy high-end synth melody that makes the listener feel they are orbiting roughly around Betelgeuse. Flashes of organ act as a nice textural counterpoint to the more spacey synth tones.

The pulsating 6/8 rhythm continues and progresses in fourth track Itinerarium. Musically, it’s the exact halfway point between jazz and electronica, with a complex bass drum pattern gradually emerging as several themes and textures combine in a polyphonic spree (good name for a band?). It then breaks down into a fantastic Rhodes section, with some superb xylophone-esque melodies floating across the sonic spectrum. It slowly dies away like the embers of a fire, bringing this overall section to a close.

Fifth track Embark grips from the outset, with a catchy chugging synth riff combining with an excellent high-end melody that morphs through several sounds. This time the rhythm is an insistent groove in 4/4 that really explodes around the two minute mark. This piece is a good example of Biro’s unique fusion of genres; if pushed I’d classify it as ambient psychedelic jazz/electronica, but really it defies categorization!

Seventh track Levitator starts out hauntingly with a sparse use of sound and space  then unfolds with a superbly controlled natural sense of musical development. It eventually reaches an astonishing crescendo and climax that actually makes you feel you’re levitating. The synth sounds at this point are mind blowing, the music having an emphatic grandeur all the more effective for the understated style that precedes it. This one is my personal favourite.

Seventh track Barren is a wonderful piece of musical impressionism that conjures up the image of being marooned on an alien planet that’s, well, barren. Its mysterious atmosphere brought to mind some of the more abstract moments of Holst’s classic suite The Planets. The following Immortal is equally dreamlike and gives the impression of gently floating through space forever. Once again, it slowly develops into a spinning web of intricate themes and melodies.

Ninth track Returning is a continuation once again with the nicely overdriven electric piano having an almost guitar-like edginess to the tone, which adds a little grit to the overall sound. Spatial, reverb-drenched synth strings give this track an almost orchestral feel which certainly adds to the epic vibe. The music catches fire around the six minute mark, some fabulous speaker-panning swirling sounds creating an intoxicating effect.

The closing piece Outside strips things right down to a sparse, enigmatic soundscape….the sound of gentle rolling waves and the most subtle of melodic themes, while a plethora of sounds from outer space float around as if suspended in mid air. It feels like a suitably mysterious finale for what has been an epic musical voyage.

Overall, this is a highly ambitious but perfectly executed electronica/ambient album. It highlights the importance of the album as an art form, as this work takes the listener on a sonic adventure where the sequence and arrangement of the tracks form a symphonic whole. It’s an album that rewards the listeners investment of attention, and gives the magical feeling of being transported to another place. To fans of this kind of music it will be adored, but it deserves to be appreciated on a much wider scale. If you’re looking for a unique musical experience, look no further than Daniel Biro’s 120 Onetwenty.