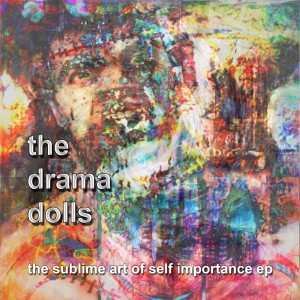 The Drama Dolls are a UK based four-piece alternative rock group. They are the brainchild of ex-colony bassist, guitarist and main songwriter Mike Cambridge, with Alan Bristow on drums, acclaimed US singer Chris Hodges on lead vocals and keyboards courtesy of Agatha. Their sound is a blend of stadium indie rock like early U2 and Muse, along with elements of 90’s alternative rock bands like The Pixies, Sugar and the Manic Street Preachers. This EP is their first release, with their debut album to be released in early 2016.

First track Don’t Waste Your Prayers is an excellent start, featuring delayed guitar on the intro reminiscent of U2’s The Edge. It develops into an upbeat rock song with a superb vocal performance from Chris Hodges, delivered at the top of his range. Although the music is uplifting, the downbeat, serious lyrics act as a good contrast: ‘I’ve seen the hope and I’ve seen the despair, I’ve seen the confusion everywhere….’. It leads to a memorable chorus that, along with the 80’s style guitar solo, brought to mind the anthemic style of Bon Jovi. This combination of stadium rock with angst ridden lyrics is something the Manic Street Preachers mastered in the early 90’s, along with Radiohead.

Second track I Want More is rather different, slower paced and more 90’s style indie rock than stadium rock, with Chris Hodges singing in a lower range. Though there are some unusual and unexpected chord changes, it still has a very memorable title hook that keeps one foot in the world of pop, which bodes well commercially. The subtle female backing vocals are very effective in adding texture to the sound.

Last track King For The Day lies in between the first two tracks in terms of pace and style. It delivers yet another strong chorus that latches in the memory the first time you hear it. Drummer Alan Bristow particularly excels on this song, and Mike Cambridge gets to show his lead skills guitar with a concise solo.

Overall, this is a highly impressive set of songs considering its their first release. In an era where factory line pop music currently rules the roost, its heartening to know that intelligent modern rock is out there being made. As this band now have a proven record of writing the kind of hooks you need to play arenas, perhaps The Drama Dolls can become part of a much needed UK rock resurgence. Here’s hoping.