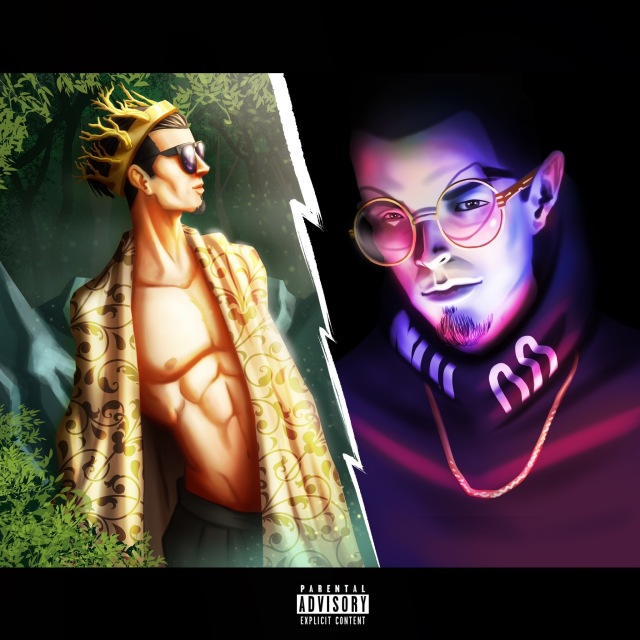 The Sun King is the artistic brainchild of Maxwell Page Fairchild (a.k.a. Malachi Navi Wahy). He is a singer/songwriter, rapper, performer and producer who grew up in Los Angeles, but now lives in New Jersey. He started singing and rapping from an early age, which developed into writing poetry. Having endured mental health and depression issues in High School, he found solace in making music. He describes The Sun King’s music as Psychedelic R&B, Experimental Chorale Music and alt. acoustic/a capella, all of which apply and more.

This album, Sun King Eternal Peace, is a musical odyssey that spans twenty seven tracks and shows the depth and range of his artistry. Opening track Post Falsehood is a good introduction to the inimitable style of the music, which defies simple genre classification. It’s fundamentally based around Fairchild’s remarkably adept vocals, which are richly layered in ‘call and response’ style a capella gospel-tinged harmonies, with world percussion and elements of R&B thrown into the mix.

The real roots of the music seem based in gospel spirituals, which traditionally conveyed a Christian message. Fairchild has developed his own unique spiritual philosophy, however, and The Sun King is but one of several musical personas he explores. His positive, spiritual side is what the music of The Sun King is about, named after the song on the Beatle’s classic album Abbey Road.

Although twenty seven tracks must sound daunting to a generation where the album as an art form is dwindling, many of the tracks are brief and succinct. They usually contain refrains that capture some life lesson learned, which can range from the poetic and profound (“Storms will pass and disintegrate, troubled winds aren’t meant to stay” from Post Falsehood) to the more quotidian and humorous (“Girls with tattoos are dangerous, they might rip your heart straight from your chest“).

This mixture of the sacred and profane, the serious and playful, is not easy to do convincingly, yet Fairchild gets the balance just right. Those looking for depth will find it; the whole project is full of alchemical symbolism and Jungian concepts, and he shares an obsession with the number three like many artists before him, going back to Dante. Indeed, the symbolism of the sun and the king is central to alchemy, which Jung saw as an allegory for spiritual transformation.

He also mixes the personal with the political; Divide and Conquer lays it out straight on our current political climate: “We are being manipulated every single day, my friends…”, contrasted with the following, “Just be the person that you are” from You Are-Be. His utopian message is made manifest in False Dichotomy: “You’re my sister, you’re my brother, there is no such thing as color...”.

His humour comes to the fore once more with What’s Pot? While some might perceive the mantra “You must experience the cannabis now…” as encouraging hedonism, to me it seems he is encouraging use of psychotropics as a means of experiencing the transcendent and it’s an apposite message now that cannabis is finally becoming legalized and accepted.

Lone Lee, NJ is a funny, poignant track that’s lyrically based on The Beach Boys’ classic California Girls, while the lovely Gentle Tiger, Beautiful Lioness is the closest thing to a traditional love song on the album. The imagery of Jesus Christ and the devil are used to powerful effect in the following Knowing of The Son and 6 O’ Clock & Never Late. The latter is a metaphor, the devil representing fear and being a slave to it.

Overcoming fear with love is central to The Sun King’s artistic vision, Isolated (ft. Jimmy Carter) being a good example. Jimmy Carter is another of Fairchild’s alter egos, this one the yang to the yin of The Sun King. This is the persona he uses when he wants to express something other than the positive messages of The Sun King, and he delivers a succinct, impressive rap in a flowing, eloquent style on this track.

Pussy Galore is a brutally honest confession about his former hedonism, and how he’s found his way through that to a purer path. Elevate From Fall is a touching track about vulnerability and having to put your heart on the line: “My dreams tell me to tell you how I feel, but I’m so resenting of the bridge, it burns in the case you don’t reciprocate…”.

The symbolism of ice and fire emerge on Freeze To Death II: The Ice Cracks and Feel The Burn, the former about emotional coldness with the latter about the consequences of letting fear overcome you: “My biggest fear had made its mark, I blew the light out and thus birthed the dark…”. The cleverly titled Run to No One, Run to Know 1 has the Sun King finding his other half: “And there I saw her in the corner of my eye, my Queen so high.…”.

Get It Darling is one of the simplest tracks lyrically, but its effervescent, irresistible positivity continues into Walking/baby Reprise: “Music is my medicine and Mother Nature’s got me so well….”. This inspiring, holistic ‘back to nature’ message is perfect for an era that is drowning in the excesses of materialism. Place This Hand shows how this music is partly rooted in the Gregorian chants of early church music, but updated for the modern age.

The final tracks Sun Prince and Sun King Opus x-xviii complete the spiritual journey, the first reminding us, “Be glad that you are free, free to change your mind….”, and the latter bringing us back to the hieros gamos, the sacred marriage at the heart of alchemy: “So I ask you, my Queen, do you have a voice to sing?“. It’s the perfect line to finish on, forging the masculine with the feminine through the redemptive power of music.

Overall, this is an absolute tour de force of an album that takes the listener on an emotional journey that runs the gamut of the human condition. It’s a work of artistic authenticity and integrity, honesty and vulnerability. The pay off is a piece of work that succeeds on several levels, whilst transforming traditional musical forms/styles and reinventing them in his own artistic vision. Essentially, this is art that’s a much needed spiritual salve for our troubled times, deserving not just critical recognition but a large, appreciative audience.

Listen to the album HERE