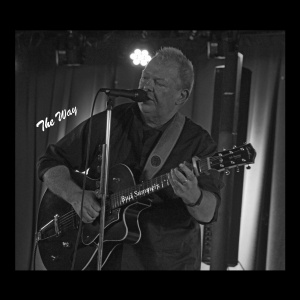 Bud Summers is a guitarist and singer/songwriter hailing from St Louis. He was raised in a musical family with a father who played jazz bass and a mother who taught music at a public school. Although he was exposed to many genres including jazz, classical, opera and show tunes, he showed a preference for blues and rock. After trying piano and violin, he settled on guitar and went on to get a B.A in Music Performance, focussing on classical guitar as well as playing in the college jazz band.

He recorded two records with The Shot Down Band then played guitar for several groups (Tizzy, Carlson, Night Train and The Stingers) before going solo in 2006. He has released five CDs of original music as well as performing around 140 shows a year on average, a regular performer in  Chicago, Michigan and Nashville. This album, The Way, consists of seven tracks and the music is an eclectic blend of blues, rock, jazz and folk, combining to create a unique style of his own which he calls ‘Groundhog music’.

This fusion of genres is evident straight away on the opening track That’s Why. A mid paced, smoky blues/jazz song, it has the intimacy and bar room vibe of an artist like Tom Waits, as well as his gritty authenticity. Bud has the perfect voice for the material, his singing style halfway between a jazzy croon and the rougher edges of blues and rock. His guitar playing is also varied, alternating tight, clean rhythm playing with raw bluesy lead guitar that works as an effective contrast.

The song is nicely structured too; a funky, jazzy progression on the verse leads to a smooth second section that lyrically depicts his infatuation: “My world is spinning, floor is gone… I float but then I fly away…. I am beginning to catch on, it was meant to be this way…”. Jason McAfee on bass and Jake McAfee on drums provide excellent supporting roles and it makes for a great start to the album.

The second track, My Baby’s Big & Bad, is a twelve bar blues acoustic song, again about a woman, but this one shows a more light-hearted, humorous side to Bud’s songwriting as you can tell from the opening lines: “More chins than a Chinese phone book, more pounds than a pot of gold, more thighs than Colonel Sanders, and meaner than a Texas Bull….”. He then recites an entertaining tale of a large lady who’s a force to be reckoned with. It features some gorgeously smooth slide guitar playing as well as some excellent raw and throaty harmonica,  also having a sly dig at politics and religion in the verses: ” Well I was down at the tavern talkin’ politics, trying to explain it to them country hicks…”.

Third track She Sings Karaoke is a return to the full band sound, with a song about a talented amateur singer who might not be suited to the big time: “Won’t they be surprised when the real world comes along, when they hold the Grammies and turns out she doesn’t belong….”. The smoky blues rock vibe brought to mind Dire Straits’ classic Sultans of Swing and Bud really gets to display his lead guitar skills, laying down a mellifluous solo played with a killer tone.

Fourth track Ain’t Got Time For Whiskey returns to acoustic twelve bar blues, with some more fine harmonica work and excellent vocals harmonies that fill out the sound. It features another superb solo, with a biting twang and not a note wasted. Lyrically, as the title implies, it’s about putting his whisky drinking days behind him and the first line of the verse is a nice twist on the time honoured blues tradition: “Well, I woke up one morning…with a splitting head… “.

The Way I Do is another blues/jazz fusion with an angular, semitone based chord progression on the verse with more standard changes for the title hook. This song is about trying to make someone appreciate that they are loved, as summed up in the mellow second section: “You’ve been saying all along I’m the best thing…. you won’t be as happy if I’m gone so just don’t be a fool and let this go…”.

Bedtime Story is a lovely acoustic ballad featuring just Bud and his guitar. This along shows the folk influence in his music and his songwriting craft. The haunting vocal melody suits the romantic words: “Be my bedtime story, help me sow and reap, be my bedtime story till I fall asleep…”. My personal favourite on the album.

The final track Common Ground switches from the personal to the social, with a raw Springsteen-style lyric (and vocal delivery) about escaping from a town that has seen better days: “There’s bars on the windows running down the street, they go on and on as far as I can see….”. It is the most powerful song on the album and shows the serious side to his writing after the levity of earlier tracks.

Overall, this is a very high quality album from a first rate guitarist and singer/songwriter. He has become a master of his craft, after many years experience, and found his own musical niche between blues and jazz. Above all else, the music is enjoyable to listen to, containing classy musicianship throughout from Bud and his musical cohorts. The appeal of his music goes beyond the blues and jazz crowd as he writes accessible songs that any music lover can enjoy. A recommended listen.

2 comments on “ALBUM REVIEW: The Way by Bud Summers”